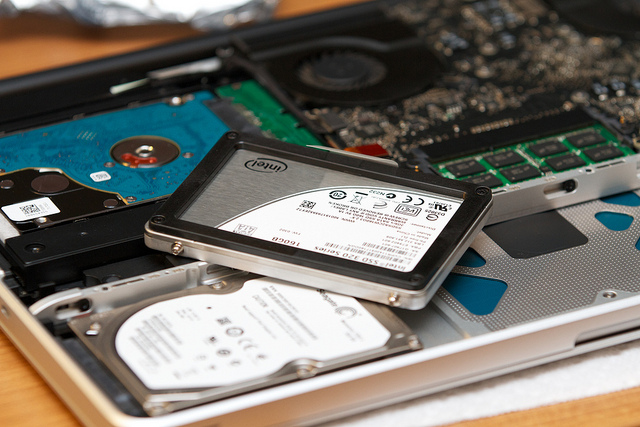 Pretty much any new computer you buy these days is likely to come with an SSD (Solid State Drive) as the main drive and the good old mechanical HDD (Hard Disk Drive) might be included but relegated to just data storage. True, some lower cost machines might forgo an SSD in place of the cheaper HDD. Below, we’ll run you through the pros and cons in the SSD vs HDD debate.

# So why would you get an SSD as opposed to an HDD?

Have you ever used a USB drive? Noticed how fast it was to move data between it and the computer? That’s because it has no moving parts. An SSD is essentially the same thing but the drive connects directly to your computers motherboard so that then increases the speed more. Now, remember how long it took to a computer to boot up and get to the desktop? Two minutes, maybe longer depending on what software you had on your computer. Imagine if that could be done in a fraction of that time. An SSD offers you the transfer speeds of RAM and USB because that is what it really is. Non-Volatile RAM (NVRAM) bundled together to form a large storage capacity and make your machine boot up in around 20 seconds or less. As SSDs get cheaper they will replace mechanical drives altogether.

# So why would you choose an HDD as opposed to an SSD?

Mechanical Hard Drives have over time evolved in access speeds due to advances in materials and software. Those advances have also lead to increasing storage capacities. A mechanical HDD can be quite large in storage and reasonably priced so you’re not out of pocket. You can buy base consumer level mechanical HDDs with a storage capacity of 4TB for around $150. Sounds good doesn’t it? And it is also easy to recover your data should the mechanics of your HDD fail, though it isn’t cheap. So why get a smaller capacity SSD for $150 when you can have a larger capacity HDD?

# Pros and Cons of SSDs and HDDs

So why would you choose one over the other? Price might be your main consideration so in that instance you would most likely choose a mechanical HDD. Capacity might also be another factor in your choice, and again a mechanical HDD would fit the bill. But, if you’re a bit savvier with cloud-based storage and price isn’t a consideration then an SSD can boost your machine’s performance considerably. We’ve even done installs of SSDs into older machines that would normally be replaced, and they’ve added a new lease on life to them. We’ve even seen a massive increase in performance on old Windows 2003 servers where they have been upgraded with SSDs.

As the technology improves and becomes more readily available we will continue to see a price drop in SSDs, so why wouldn’t you take advantage of that speed boost and go SSD?